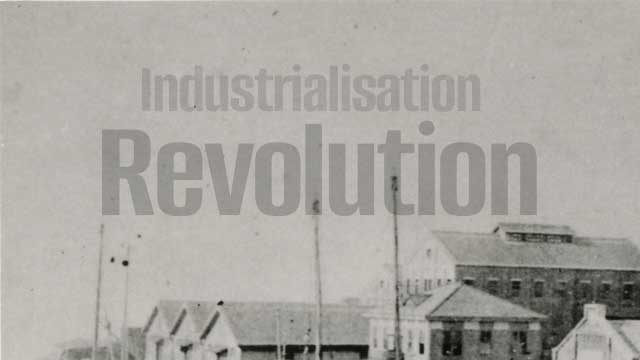 Japan underwent a transformation between 1853 and 1894. 1867 marked the beginning of the Meiji era, a period of westernization and industrialization for Japan. As it relates to the several competitive exam, this article discusses the Industrial Revolution in Japan like the industrial revolution in America.

Reforms of the Meiji Government

To foster capitalism in Japan, the Meiji Government implemented a series of reforms. The feudal system of post stations, merchant guilds and checkpoints that hindered industrial development was scrapped away. The first telegraph line between Tokyo and Yokohama was established in 1869 as part of the new infrastructure.

The previous courier system was replaced in 1871 by a modern postal service, which sold stamps and postcards at fixed prices. With the joining of the Universal Postal Service in 1877, Japan’s postal services were connected internationally. Japan imported its first telephone set the same year.

Yokohama and Tokyo would have their first rail service in 1872. During 1874 and 1877, new links were established. Almost all of Japan had been connected by rail by the end of the century. In addition, the government upgraded major roads in the country to ensure smooth transportation of goods throughout the country.

As a result of government patronage, the Meiji authorities encouraged the establishment of private companies that would compete with Western companies in the future. Some of these companies would be supported by the government, including Mitsubishi, Mitsui and Ono. In the early Meiji era (1868-1912), Japan’s rapid modernization was due to the progress made during the Edo period (1603-1868).

As the economy progressed from manual labor and farm labor to greater industrialization based on labor during the first 100 years of US history, the Industrial Revolution occurred. In the United States, there were many improvements in technology and manufacturing fundamentals that resulted in greater economic growth and production.

As a result of the Industrial Revolution, the United States dominated technological change and growth during the Second Industrial Revolution and the Gilded Age. In addition to reducing labor shortages, the Industrial Revolution also saw an increase in productivity. The Wilderness Road and the Erie Canal, as well as steamboats and trains, made it easier for low-density areas of the United States to connect with population centers during this time. It was possible to develop the assembly line because of interchangeable parts. By automating production, the assembly line eliminated the need for skilled craftsmen by allowing each worker to perform just one repetitive task instead of the entire process.